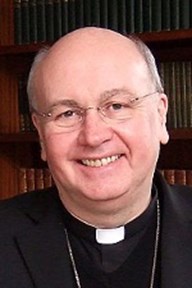 Archbishop McDonald was born in Stoke on Trent on 18th of August 1947. His first degree was from the University of Birmingham after which he went to the English College in Rome and was ordained priest on 20th of July 1974. He has a Licentiate from the Gregorian University and a Doctorate from the Angelicum University in Rome. He also has an Honorary Doctorate of Divinity from the University of Birmingham. He has been Parish Priest in Sparkhill in Birmingham and worked for eight years at the Pontifical Council for Christian Unity in Rome. He also taught at Oscott College in Birmingham, including three years as Rector. He was appointed Bishop of Northampton in 2001 and Archbishop of Southwark in 2003, a post from which he resigned for health reasons in 2009.

Archbishop McDonald continues to be active and has responsibility for Catholic-Jewish relations and Interreligious Relations within the Catholic Bishops’ Conference of England and Wales. He is a Consultor to the Pontifical Commission for Religious Relations with the Jews and is also involved ecumenically, particularly with the Ancient Oriental Churches. Was Grand Prior of the England and Wales Lieutenancy of the Knights of the Holy Sepulchre,  until succeeded by Archbishop John Wilson in 2021.  He also advises the CHARIS National Service of Communion (CNSC), which is the principal co-ordinating organisation of the Catholic Charismatic Renewal (CCR) in England and continues to live in London.

The Most Reverend Peter Smith RIP

Appointed Apostolic Administrator 10 June 2019 following the acceptance of his resignation from Office and the appointment of Archbishop John Wilson as Archbishop Elect of Southwark on 10th June 2019. He began his retirement upon the installation of Archbishop John on 25th July 2019.

Following a short illness Archbishop Peter died at the Royal Marsden Hospital, Chelsea, on the 6th March 2020; may he rest in peace

Archbishop Peter Smith was born in Battersea on 21st October 1943.

He completed his secondary education at Clapham College and gained his degree (LLB) from Exeter University in 1966. Studied for the priesthood at St John's Seminary, Wonersh, and was ordained Priest on 5th July 1972.

In 1977 he gained Doctorate in Canon Law (JCD) from the Pontifical University of St Thomas Aquinas in Rome and became Professor of Canon Law at St John's Seminary (1977 - 1984).

Following St John’s Seminary, he was appointed as Bishop of East Anglia in 1995 and Archbishop of Cardiff in 2001. On 30th April 2010, the Holy Father announced that he would succeed Archbishop Kevin McDonald as the tenth Archbishop of Southwark. After nine years, having reached the age of 75, his resignation from office was accepted by Pope Francis on Monday 10th June 2019; he was appointed Apostolic Administrator for Southwark the same day to oversee the transition period until the installation of his successor, Archbishop John Wilson, on the 25th July 2019.

His other previous responsibilities have been as Chairman of the Catholic Truth Society (1993 - 2007) and Chairman of the Central Religious Advisory Committee (CRAC) of the BBC and ITC (2001 - 2004). He was appointed Sub-Prelate and Chaplain of the Order of St John of Jerusalem in 2002. He has been awarded Honorary Fellowships at St Edmund's College, Cambridge (1997), the University of Wales, Lampeter (2004) and Cardiff University (2006).

Archbishop Emeritus Michael Bowen faced the challenge of implementing the reforms of the Second Vatican Council. He introduced new structures in the Archdiocese of
Southwark and brought about renewal in many areas of Church life.

Born in Gibraltar on April 23, 1930, he grew up in Wimbledon, South-West London. He had one brother. He was educated at Avisford House preparatory school, near Arundel, and then by the Benedictines at Downside School. When he was ten, his father, a major in the Army, was killed in action in Norway during the Second World War. His mother remarried in 1945, to Sir Paul Makins.

In 1949 he was called up for National Service and commissioned as a second lieutenant in
the Irish Guards, his father’s regiment. Afterwards, he spent a year at Trinity College,
Cambridge, and then worked briefly in the wine trade.

He began his studies for the priesthood at the Venerable English College in Rome in 1952. During his time there, he produced Gilbert and Sullivan operas and also played cricket in a league. He gained theology and philosophy degrees from the Gregorian University and was ordained in Rome on July 6, 1958.

His first post was as a curate to St Gregory’s, Earlsfield. In 1960 he moved to The English
Martyrs, Walworth, where, in the evenings, he taught at St Augustine’s House, a hostel for working men who were thinking about the priesthood. In 1963, with the Second Vatican Council underway, he returned to Rome to teach theology at the Beda College. He came back to England in 1966 to become Chancellor of the newly established Diocese of Arundel and Brighton.

In 1970 he was consecrated coadjutor bishop for the diocese of Arundel and Brighton. The following year, on June 27, after the death of Bishop David Cashman, he was made the diocesan bishop.

As a result of the Second Vatican Council, the 1970s were marked by changes and new ideas in the Church. For most of the decade, Bishop Michael was a member of the Bishops’ Education Committee and also chaired the catechetical commission.
He was involved in the decision to close Corpus Christi College, a national centre of religious education in Kensington, because of concerns over its interpretation of Catholic doctrine.

Along with Cardinal John Heenan, he represented the Bishops of England and Wales at the 1971 Synod of Bishops, which Pope Paul VI called to explore the twin themes of priesthood and justice and peace in the world. From 1972 to 1975 he was co-chairman of the Catholic/Methodist International Commission.

Following the death of Archbishop Cyril Cowderoy, he was appointed Archbishop and
Metropolitan of Southwark on April 23, 1977. One of the first major decisions Archbishop Michael took was to divide the Diocese into three pastoral areas, each with its own bishop. His plan, some years later, to split the Diocese into two, with Kent having its own cathedral, was rejected by the Holy See. He appointed a Director of Diocesan Pastoral Renewal and, to provide the laity with a greater voice, established a pastoral council in each of the 20 Southwark deaneries.

The welfare of priests and religious was something he cared deeply about. To enhance their spiritual and theological development, he organised a number of days of prayer and study. He expanded the permanent diaconate and established a formation programme, built around weekend studies at St John’s Seminary, Wonersh.

Due to falling rolls, he implemented a major re-organisation of secondary schools in south
London and created its first sixth form college. He set up chaplaincies for universities in
south London and also several chaplaincies for ethnic communities.

Pressures on marriage and family life were a concern to him. In a rare newspaper interview, in 2001, he said, “We need Catholics who are willing to be trained as marriage counsellors. We need parents to get involved in parenting courses, and we also need to support single parents and those who are divorced and separated.”

The changes to the liturgy since the Second Vatican Council had not been welcomed by all Catholics. In an attempt to meet their pastoral needs, he gave permission for the Tridentine Mass to be celebrated in some churches in the Archdiocese.

One of the high points of his time in office was the visit of Pope John Paul to St George’s
Cathedral in 1982 to celebrate a Mass for the sick. It was Archbishop Michael who
suggested that the seven sacraments be the theme of the pope’s six-day visit to Britain.
The profile of St George’s Cathedral was raised considerably during his time, and he
launched a £5 million appeal for its refurbishment. It staged concerts, took part in the
Southwark Literary Festival and hosted the annual graduation ceremony for the students of South Bank University.

In 2000 he welcomed to the Cathedral Cardinal Godfried Danneels, the special envoy of
Pope John Paul II, who led vespers as part of the celebrations to mark the 150th anniversary of the restoration of the hierarchy of England and Wales.

Archbishop Michael held a number of key posts at the Bishops’ Conference. He was
chairman of the department of Christian Life and Worship from 1983 to 1999 and the
committee for family life from 1983 to 1986. In 1996 he was elected vice-president. Following the death of Cardinal Basil Hume in July 1999, he became president, a post he held until the election of Archbishop Cormac MurphyO’Connor in 2000.

For 26 years he served both as a governor of Digby Stuart College, Roehampton, and Chair of Southwark Province’s Bishops’ Committee for St John’s Seminary, Wonersh. He served for15 years on the Bishops’ Committee for the Venerable and Beda Colleges in Rome and 11 years as a director of Catholic National Mutual Ltd. It was characteristic of him to always go out of his way to thank people after confirmations and parish visitations. In 1999 when a man with a sword ran amok at the 10 am Sunday Mass at St Andrew’s, Thornton Heath, injuring eleven people, he drove to the parish the following weekend to offer support.

He tendered his resignation in November 2003, a year before the usual age of 75, so that
the Diocese would not be without a bishop for a lengthy period.

Following the announcement of Archbishop Bowen’s resignation, then-Cardinal Cormac
Murphy-O’Connor said: “He has been a true teacher and guide to his flock, a man who has
led with certainty and humility, and served well the people and priests of his Archdiocese.”

He was Grand Prior of the Equestrian Order of the Holy Sepulchre of Jerusalem, received an honorary fellowship from the University of Roehampton and was made a Freeman of the City of London.

Throughout his life he enjoyed golf, tennis and cricket. He once played against the Duke of Norfolk XI at Arundel and - the story goes - got out legendary England batsman Colin
Cowdrey. He will be remembered both as a gentleman and a gentle man.