The evening ‘Webinar’ was organised by the Unity Commission of the Archdiocese with a view to understanding the current situation in our part of South London.

Bishop Paul Hendricks introduced the topic and our speaker for the evening, Fr Christopher Pearson from The Borough Parish (Southwark). The way the Ordinariate works within this parish was to occupy much of the talk and the discussion which followed.

Bishop Paul spoke of the opportunity to experience Receptive Ecumenism through the Ordinariate. The particular gifts and patrimony offered by Anglicanism is incorporated in the Ordinariate’s approach and we can draw from the richness presented by this. Going forward, it could be a model for advancing Unity. 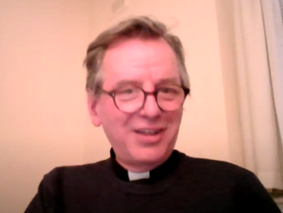 Fr Christopher, an engaging speaker with a relaxed manner, started by explaining the background developments in Pope Benedict’s time. Here in England, the ‘Ordinariate of Our Lady of Walsingham’ was set up in January, 2011. There are two other Ordinariate groups, in North America and Australia.

In England, St John Henry Newman is a patron, unsurprisingly given the significance of the ‘Oxford Movement’ of the 1800’s. Benedict’s ‘Anglicanorum Coetibus‘ document in 2009 and his visit to the United Kingdom in 2010 with the Beatification of Newman, as well as Benedict’s direct experience of the denominations while he was here, must have influenced the progress towards establishing the Ordinariate.

Anglicans of a High Church persuasion had formed the ‘Forward in Faith Group’ to advance their cause and determined three requirements: to select and train their own priests, the ability to make their own decisions and to engage in free ecumenical dialogue. After Benedict’s offer they realised they had three choices: to continue ecumenical dialogue outside the Ordinariate, to set up a new group in place of Forward in Faith, or to join the new Ordinariate which lay people could also join.

Bishop Paul pointed out that the Ordinariate is part of the Latin Rite group of Churches in full communion with Roman Catholicism.

The Ordinariate in England & Wales has its own Ordinary, Mgr. Keith Newton, to whom all the Ordinariate clergy look for direction and guidance. Those working in parishes also work under the Diocesan Ordinaries, in our case Archbishop John Wilson. Fr Christopher explained how his predecessor, Archbishop Peter Smith had made the local Ordinariate group of priests very welcome. He also established the Borough as a parish in which the Ordinariate could function alongside the life of the Catholic community and liturgy. Fr Christopher was appointed the Priest in Charge of the joint community. 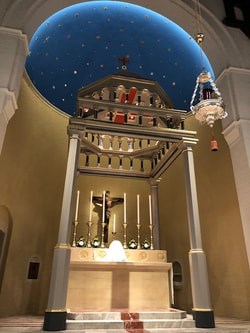 Borough parish has inherited the Anglican practice of high lay involvement. Fr Christopher does not get involved in finances at all and the two communities are separate but with some overlap in organisation and finance. Their ‘Governing Council’ is the equivalent of an Anglican PCC. For a lay person to join the Ordinariate, it is necessary for their formation to be given in the Ordinariate way. A Catholic could not simply join the group. It emerged that some High Church Anglicans still feel that Ordinariate members have been disloyal. Fr Christopher emphasised charity and tolerance in all things. As in Newman’s day, some friendships have suffered.

Included in the Anglican patrimony is ‘Evensong’. The distinct English of the King James Bible also features along with other prayers in time honoured language, such as the Penitential Rite. All Catholics are welcome to attend any Ordinariate Services and to receive Holy Communion.

A variety of questions followed, ably directed by Robin Orton. The session ended exactly on time, with much appreciation expressed and Bishop Paul thanked our main speaker Fr Christopher.

The webinar can be viewed on the CUC YouTube channel here: Unity Commission Discussion on The Ordinariate

The Archdiocese of Southwark is blessed with many commissions carrying out a variety of work, from Education to Ecumenism and Safeguarding to Spirituality. They all play an active role in the life of our Catholic community.

Agency for Evangelisation and Catechesis

The Christian Unity Commission for the Roman Catholic Archdiocese of Southwark has been in existence for over forty years. Our main task is to encourage Catholics within the Archdiocese to work and pray for Christian unity.
Continue Reading

Do you share our vision of a world in which people live in peace and harmony with one another and with nature, where our common humanity is respected and all can contribute freely to the common good?
Continue Reading

The diocesan Liturgy Commission has a responsibility to the Archbishop for the promotion of the liturgy and other acts of public worship. Its work encompasses the buildings in which we worship, the music with which we praise God and training for those involved in the liturgy in different ways.
Continue Reading

The Southwark Marriage and Family Life (MFL) team is responsible for initiating, fostering and supporting activities in the diocese that will enable married couples more fully to live out their sacrament of matrimony by enriching their relationships.
Continue Reading

Although it has not been possible to undertake any pilgrimages until very recently, due to the COVID-19 Pandemic, it is ordinarily a regular part of Catholic life. The Christian life is a journey towards God, and in this simple act of outward physical travel, whether on foot or by aeroplane, we inwardly seek to draw closer to Christ by putting time aside to consider our relationship with the Lord, and ask where he is leading us.
Continue Reading

Welcome to Safeguarding within the Archdiocese of Southwark.
Continue Reading