The Papal Nuncio, Archbishop Claudio Gugerotti, visited Napier Barracks on 31 March at the Pope's request, accompanied by Bishop Paul McAleenan, the lead on migration and asylum issues for the Bishops' Conference of England and Wales 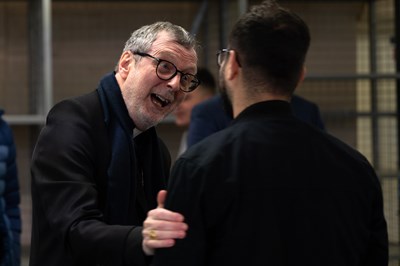 Arriving amidst fierce snowstorms and after passing many miles of traffic queues due to hold-ups in the port of Dover, Archbishop Gugerotti listened to the asylum seekers’ stories and learned about their struggles, expressing his concern

“to show respect, to love them because the Catholic Church is centred on the message that ‘God is love’. I think it is a very good way of exercising one’s mission as a diplomat – to be the expression of the love of Peter and the successor of Peter who conveys the message of Christ that each person is a masterpiece.”

He later travelled to Dover for a meeting facilitated by Seeking Sanctuary, to hear local representatives from support groups, several local clergy and approaching 30 young exiles brought by the Friends of Napier. The Nuncio was keen to have informal 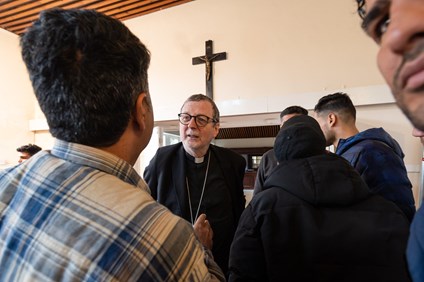 conversations and break through language barriers to hear people's stories of life at home and dangerous journeys to Britain. Those who have reached the safety of Kent are clearly delighted to have found a place where they can look forward to building a better future.

The parish priest of the Good Shepherd, which consists of Mass centres in Aylesham and Dover, Fr Jeff Cridland, was joined by his associates Fr Jamie Houghton and Deacon Barry Barton and by Deacon Gehad Homsey from Folkestone, the latter of whom is a chaplain at Napier Barracks. Sisters Alice and Elssy from Folkestone also attended, along with staff and volunteers of the Jesuit Refugee Service. 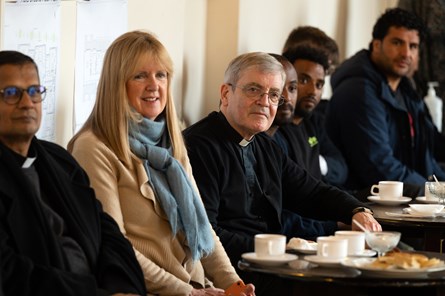 atmosphere among the large and varied gathering, as well as by the warm welcome and hospitality from parishioners. Although most refugees seemed to speak little English, peoples' smiles broke the ice and helped everyone relax and enjoy each other’s company. Monsignor O'Toole remarked:

“This was a living experience of the words of Pope Francis inscribed on the seafront plaque where we prayed – 'Every migrant has a name, a face and a story'.” 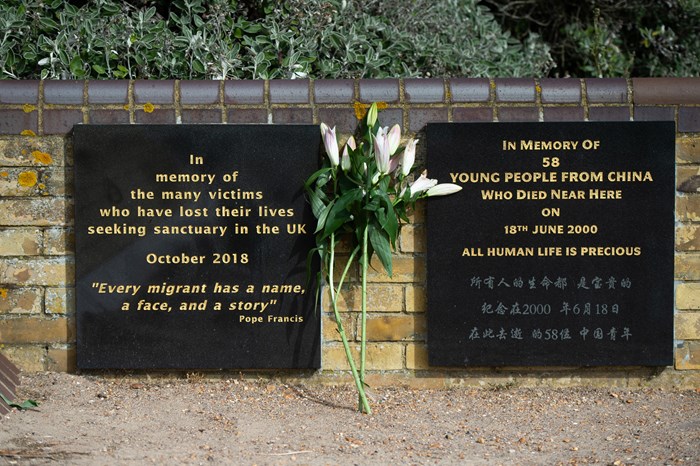 Plaques at Dover seafront commemorating migrants who have lost their lives.

A welcome variety of refreshments was provided in St Paul's Church Hall, and people familiar with the 120-year-old Barracks outlined various features of concern. In peacetime, it housed small groups of personnel for training exercises lasting for a few weeks, rather than large numbers of people for months on end.

Barbed wire toppings to fences had eventually been removed and sheeting added to prevent anti-migrant demonstrators from peering through.  At present, there is something of a lack of privacy in dormitory cubicles and communal shower facilities: a situation 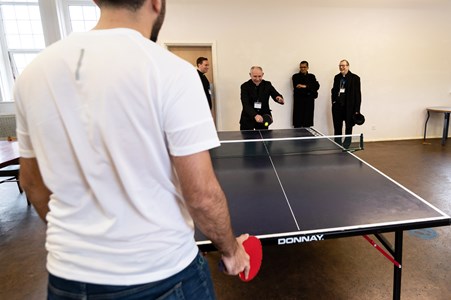 which needs to be addressed in order to protect the dignity of residents.  However, those at the barracks are nonetheless delighted to be out of danger.

A number of volunteers visit to run language classes as well as physical exercise and sporting programmes, with books, equipment and indoor games delivered by local people of good will.

Dover and Folkestone have welcomed new arrivals for decades and contrary to media reports of opposition demonstrations bolstered by visitors to the area, donations have started to pour in.

The visit concluded with prayers in the freezing wind at the plaques remembering those who have died attempting to reach our shores. After taking photos alongside the sea, the lads from Napier warmed up with welcome cups of coffee in the nearby Premier Inn before leaving for Folkestone.

After the visit, Fr Jeff Cridland commented in the parish newsletter that 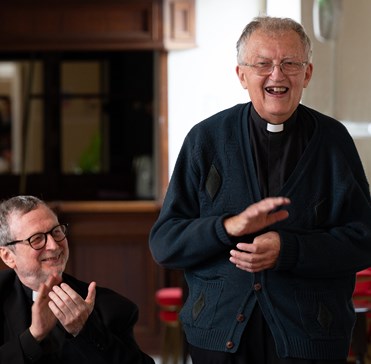 “The hall was packed and the Nuncio spoke beautifully. It was such a lovely occasion that most came down to the service we had afterwards by the memorial on the seafront. Thank you to those who helped prepare and thank you, too, to the Good Lord.”

We pray for the continued safety of Ukrainian refugees at this time, and for an end to war.

Seeking Sanctuary aims to raise awareness about people displaced from their homes and to channel basic humanitarian assistance from Faith Communities and Community Organisations via partnerships with experienced aid workers.

Refugees need food, water, good counsel and clothes, which are accepted, sorted and distributed by several organisations.  If you wish to contribute, please contact Phil Kerton on 01474 873802.

With thanks to Phil Kerton for this article.

Images from the Papal Nuncio's visit to Napier Barracks in Kent

Images: with thanks to Marcin Mazur at CBCEW

Additional photographs of the Nuncio's visit to Napier Barracks 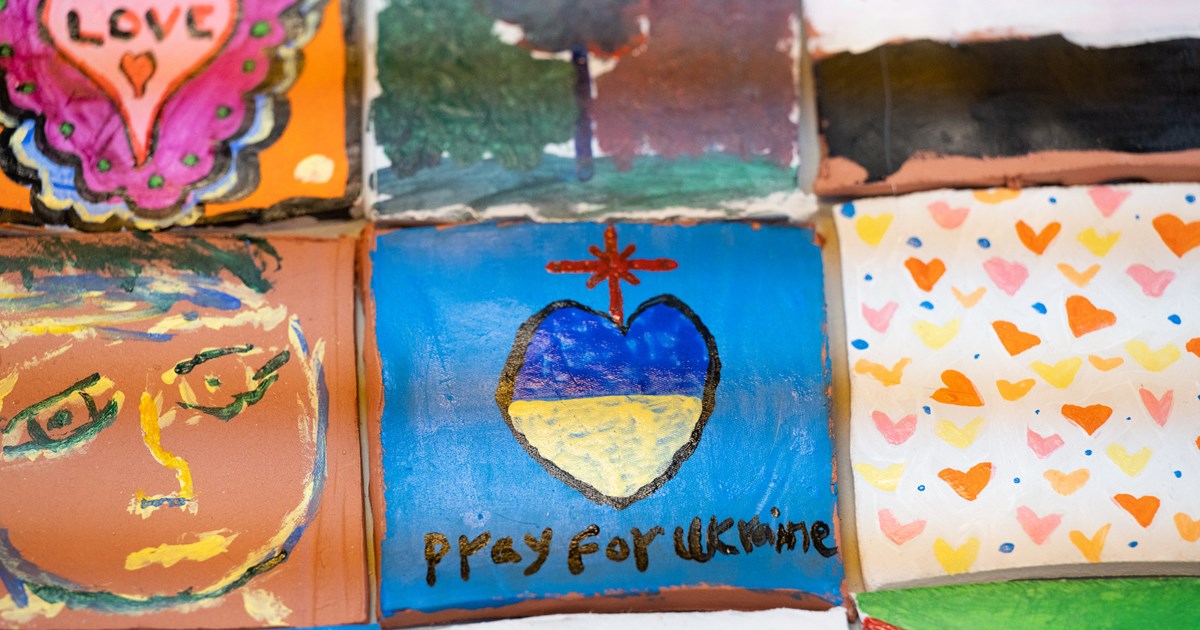 Holy Week commences on Palm Sunday, when Jesus rides into Jerusalem on a donkey, lauded by the people. However, the mood changes, and the same people are asking for his crucifixion only days later. Continue reading